At a time of such ecological uncertainty, when some of our greatest minds have given us 1000 years as a species until extinction, one thing is abundantly clear: the study of celestial bodies, near and far, has never been more important.  And while 1000 years may be a bit far off to even comprehend, it behooves us to broaden our understanding of our neighboring planets in stars in hopes that when the time comes for us to leave our terrestrial trappings behind, we’re ready.

This is exactly what educators at George West High School have been working on for the past two years with their innovative STARS (South Texas Astronomical Research for Students) program.

“It has widely been assumed that scientific research and especially astronomical research was an endeavor to be pursued at the university level, and even then primarily by graduate students, certainly not at the high school level.  STARS challenges that notion.”

STARS is not limited to astronomy. At Research Ranch, tiny ranch by Texas standards of only 34 acres, introduces students to real research in the following fields of study:

According to the report, in the first two years of this project all the areas above demonstrated tremendous progress in regards to research. Current efforts continue to focus the project primarily on astronomy, materials engineering, and solar energy.

One of the most exciting developments of the past year was the STARS observatory telescope coming fully online to fully begin the program.  It’s housed in the Mobile Astronomical Observatory, an 8 by 16 foot, 30-year-old converted marching band trailer.

This year saw the final steps of the transformation into a scientific research facility.  Even receiving a brand new coat of paint and its official logo as the school year began.

The mobile observatory is divided into a control room and telescope room section. Most of the student researcher’s time is spent in the control room which is climate controlled.

The primary instrument used this year with the telescope was the thermoelectrically cooled CCD camera that could be used to take timed exposures of the heavens as well as make measurements of star brightness at a variety of wavelengths. This opens the possibility of making measurements of color and surface temperature of stars or the shapes and rotational periods of asteroids. The student operators, CCD camera and main telescope are shown in the slideshow below.

The observatory isn’t the only thing to be excited about.  An unexpected offshoot of the astronomy program has been a new rocketry program.  Interest in the mobile observatory inevitably led to an interest in all things space, and it led students to pursue the Team America Rocketry Challenge.  Two teams from George West High School participated in this nationwide competition.  The challenge was to build a rocket that would carry two raw hen eggs to an altitude of exactly 850 feet and return them to the ground undamaged in a flight time between 44 and 46 seconds.  This is a most difficult task and one of the two teams (Cloud 9) qualified for the national competition.

The solar ranch is another reason to celebrate this program.  Junior Ryan Repka has been working on two different designs for photovoltaic arrays.  The first one is the semi-active array.  The first panel will be finished before the end of the school year and will be installed during the summer of 2016 with the entire photovoltaic array to be completed during the fall 2016 semester.  At that point, Ryan  will begin a semester long study as to the best ways to maximize efficiency, from panel positioning to water cooling of the panels. 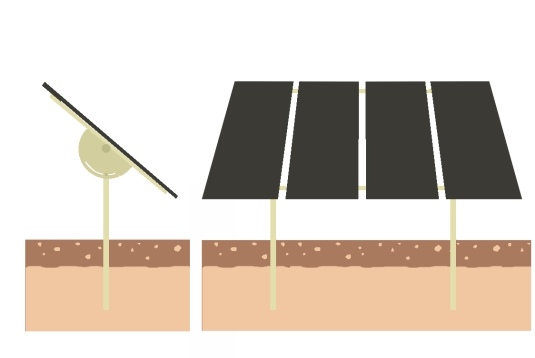 Through repositioning of photovoltaic arrays as part of the STARS research project, an additional 15-20% solar power efficiency can be realized.While this project exceeds expectations for high school students, it continues to expand student learning opportunities.

In terms of agricultural and ecological research, the project is just beginning to make progress. In fact, an intriguing future project is taking shape.  Not far from the observatory site and solar ranch, the first trees of a citrus orchard have been planted.  The observatory site is a bit north of the main citrus growing region of Texas. Being on a hill out of areas of cold sinking air help, but this area is subject to serious killing frosts about one year in four.  To combat this problem, the students and educators plan to develop what they are calling a microwave defroster.  This system could be used to prevent frost damage on citrus but would be even more useful on more sensitive winter vegetables such as lettuce. They plan to initiate a pilot project for this device no later than the winter of 2018.

It truly is an exciting time to be a student or a teacher participating in the STARS program at George West High School.  There’s something very powerful about teaching and learning while simultaneously working for a better future for all humans.

We are excited to announce that our application for the 2023-2024 season is open. Applications will be accepted until April 15 (or until we reach our maximum capacity of 350 submissions).