Playmaking Puts Fundamentals in the Spotlight

LAMusArt’s Playmaking project approached their goals with a lot of ambition and spirit. Their program was an exciting one, aimed at engaging students ages 9 – 11 in the fundamentals of playwriting over the course of 10 weeks, culminating in a full scale performance of the student written plays by adult actors. It can be extremely difficult to schedule several adult actors to appear in one place at any one time, but in Los Angeles this difficulty can be compounded. So the fact that they were able to get 11 kids plays up and running cast with professional actors is something that on it’s own should be applauded.

But before we get into what they accomplished, let’s take a dive into what goals they set out to accomplish.

1) to give underserved students in their East Los Angeles communities a public opportunity to experience success and recognition through artistic expression, authorship, and performance regardless of race or gender.

2) to aid the growth and development of each student’s important life skills, including their cognitive and emotional evolution, and their creative, academic, social, and behavioral progress by way of artistic opportunities.

3) to validate each student’s unique voice by giving them an opportunity to tell and see their own stories about their respective experiences.

4) to bridge the gap between our community and the life-affirming power of the arts, which they’ve been traditionally barred from due to barriers like language, finances, and exposure.

5) to provide students with the academic attention they lack in public schools, including inclusive and enriching creative programs and better student/adult ratios.

4) to increase student learning in fundamental theater concepts and practices.

Now, a number of these goals seem a bit hard to quantify. Many of which won’t be fully known until long after the student has left the program. But, you might be surprised by the results that the parents are reporting. But we’ll get to that shortly.

So how did they accomplish their goals?

Over the course of 10 weeks, each student kept a notebook of their weekly writing exercises, vocabulary lessons, and understanding of key concepts. Each student was able to grasp these exercises, as proven by the completion of their original plays. Although some plays were more complex than others, every student completed a play with at least two characters and a central conflict between those characters. The driving idea that was used to emphasize dramatic storytelling was “Want. Conflict. Change.” They started the course by establishing that every character must have a strong want or wish. To move the story forward, they put characters with different wants in a scene together to establish a high-stakes conflict, in which the characters want to get in the way of each other. To resolve the story, they needed a change, from either one or both characters, or an outside force. The idea of “Want. Conflict. Change.” was interpreted in different ways by each student, resulting in wildly different, but entirely vibrant and entertaining works. And having personally attended the event I can say that what resulted was a wildly surreal night of shows. Even though their concepts were simple… or often nonsensical (like the boy and his friend, and a slice of pizza) what they demonstrated was unfiltered creativity. It’s not often that playwrights get to write without self consciousness, and while it’s doubtful that they approached it without self doubt — the final product betrayed a sense of fun, unfettered imagination, and clear encouragement to tell the story they want to tell.

Student working with staff on their play 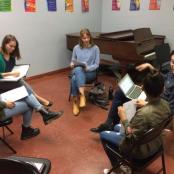 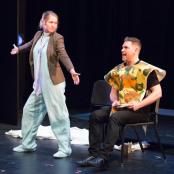 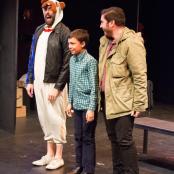 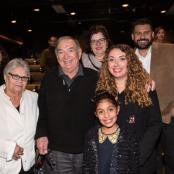 Family members and the community enjoy the show 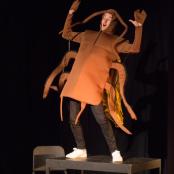 So where are the students now and how are they doing?

According to reports from the parents, the students have seen vast improvement in all areas that the program set out to address.

Now, I’m no math teacher, but 100% returns across the board seems to me to be pretty good results. If not pretty great.

But no program is without its challenges. How can this one improve?

Another challenge they faced was giving the composer sufficient time to compose an original song for each play. Because the songs and plays were not written until Play Day, the composer was unable to read the plays and lyrics until a day before the first rehearsal, giving barely enough time to compose a new piece. They believe this can be improved by having the composer present on Play Day to aid the students in writing their lyrics. This will also give the composer a better idea of what the student has in mind stylistically for their song.

Completely surmountable challenges aside, this program seems to have legs that are going to carry it into the future and help improve the confidence, writing, and collaboration skills for any students involved.

We are excited to announce that our application for the 2023-2024 season opens on January 15, 2023. Applications will be accepted until April 15 (or until we reach our maximum capacity of 350 submissions) each year. Mark your calendar to be prepared and submit your application early!